The survival of Africa’s elephants is under threat, with estimates suggesting more than 20,000 were killed in 2013, a report says.

The office of the Convention on International Trade in Endangered Species (Cites) said poaching levels were far above the elephant birth rate.

However, the report said poaching numbers had dropped slightly compared to the previous two years.

Transnational organised crime appeared to be involved in the trade, it added.

Cites, which is based in Geneva, is responsible for regulating the international trade in more than 35,000 species of plants and animals. 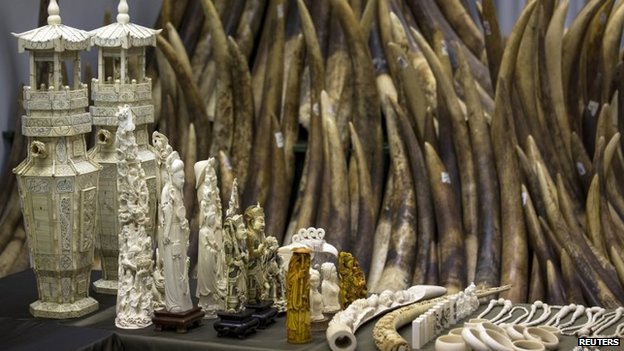 China has started to destroy seized ivory in public

There are a number of interesting signals in these latest figures, perhaps indicating that the tougher line being taken by Cites is bearing fruit.

For the first time, more large-scale consignments of ivory have been seized in Africa rather than in Asia.

This is down to better policing in Kenya, Tanzania and Uganda and perhaps a slight downturn in demand from the key markets such as China, which carried out the first public destruction of ivory earlier this year.

There is also the rise in demand in China for legal mammoth ivory that is mainly exported from Russia, which may also indicate a growing awareness of the connection to elephants and a willingness to look at alternatives.

While these may be positive indicators, the report highlights continuing bad news.

The slaughter of elephants is rising in countries like the Central African Republic, where local populations remain on the verge of extinction.

“Africa’s elephants continue to face an immediate threat to their survival from high levels of poaching for their ivory,” said Cites Secretary-General John E Scanlon.

The report also documented an increase in the number of large seizures of ivory – of shipments over 500kg (1,100 pounds), in 2013. 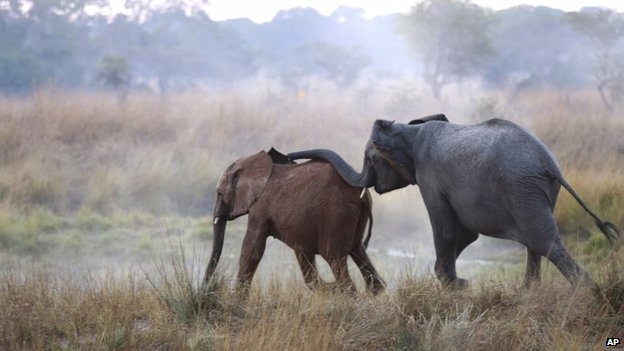 For the first time, there were more such seizures in Africa than Asia, with Kenya, Tanzania and Uganda accounting for 80% of the seizures, the report said.

While elephant conservationists do believe that increased ivory confiscation is a sign that law enforcement is improving, they also point out that demand for ivory remains very high, says the BBC’s Imogen Foulkes in Geneva.

Conservationists say that even in some of the monitored elephant populations, poaching is actually increasing, our correspondent adds.

The Cites poaching estimates were based on data from 51 sites across Africa, which accounted for 30-40% of the continent’s elephant population.

Figures from those site were extended to estimate the total numbers killed in Africa.