Israel and Hamas have put into effect an unconditional 72-hour humanitarian ceasefire in Gaza.

However, hours after the truce began, Palestinians said four people had been killed by Israeli fire, apparently in response to a rocket attack.

Israel says it will continue to destroy tunnels built by Hamas into Israel.

Israel says it aims to stop rocket attacks by Palestinian militants in Gaza and remove the threat of being attacked from the tunnels.

Hamas wants a blockade of Gaza, maintained by both Israel and Egypt, to be lifted.

The BBC’s Jon Donnison in Gaza says that Israeli bombing and Palestinian rocket attacks continued until the start of the ceasefire but the skies are now quiet.

During the morning life appeared to be returning to some kind of normality in Gaza, with many Palestinians heading towards heavily shelled areas to see if their homes were still intact.

But the Gaza health ministry reported that four Palestinians were killed and dozens were injured in an Israeli attack near the southern town of Rafah after the ceasefire began.

Israeli military sources told the BBC the attack was in response to rocket fire on Kerem Shalom in Israel.

Announcing the ceasefire, the US and UN emphasised its humanitarian nature but said Israeli troops would be allowed to stay on the ground in Gaza. 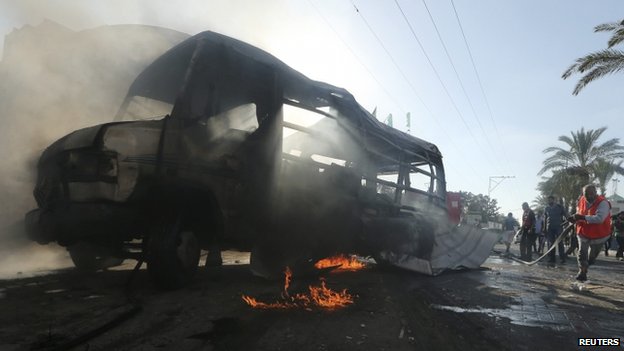 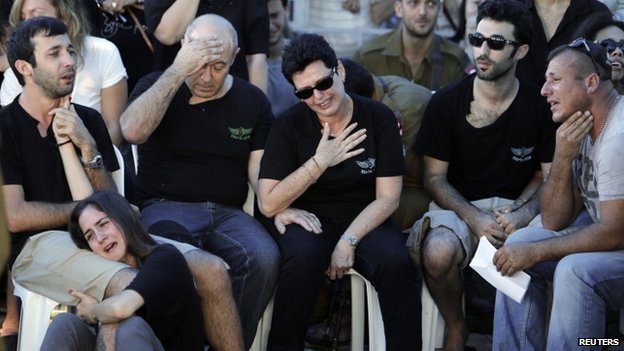 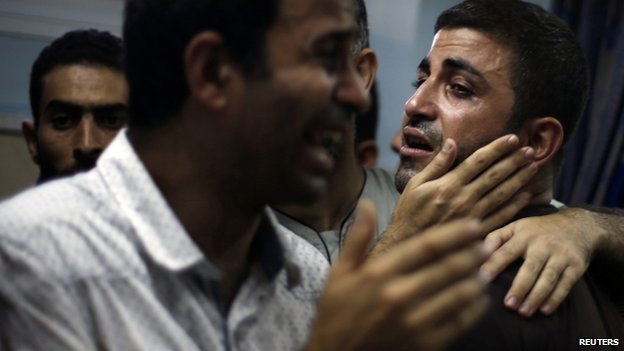 Critics of Israel say that its military action has made it impossible for the 1.8 million people of Gaza to find shelter from air and artillery strikes

“We urge all parties to act with restraint until this humanitarian ceasefire begins, and to fully abide by their commitments during the ceasefire,” US Secretary of State John Kerry and UN Secretary General Ban Ki-moon saidÂ in the joint statement.

“This ceasefire is critical to giving innocent civilians a much-needed reprieve from violence,” the statement went on.

It said that during the ceasefire period, civilians in Gaza would receive “urgently needed humanitarian relief, and the opportunity to carry out vital functions, including burying the dead, taking care of the injured and restocking food supplies”.

Speaking in India, Mr Kerry warned that a break in the fighting did not guarantee an end to the conflict.

“This is a respite. It is a moment of opportunity, not an end,” he said.

Israeli and Palestinian delegations are headed for Cairo for negotiations with the government of Egypt, at the invitation of Egypt, the statement said, with the aim of reaching “a durable ceasefire”.

Correspondents say both Israel and Hamas will be content with a long-term truce similar to those that ended the conflicts in 2009 and 2012.

Hamas and the broader Palestinian authorities are seeking an end to the blockade on Gaza.

Israel meanwhile wants the demilitarisation of Gaza and international guarantees against the replenishment of Hamas rocket stockpiles and the building of new tunnels into Israel,Â the New York Times reports.

Gaza-Israel conflict: What is the fighting about?

The fighting has left Palestinians separated from their families, as Ian Pannell reports

Israel has released footage of an aborted air strike in response to criticisms of the level of civilian casualties, as Orla Guerin reports

After days of diplomatic despondency, this is an unforeseen breakthrough, the BBC’s UN correspondent Nick Bryant reports from New York.

Qatar and Turkey are reported to have been key to ceasefire efforts as they can communicate with Hamas, which has difficult relations with many other countries.

UN High Commissioner for Human Rights Navi Pillay has accused both sides of violating the rules of war.

She said Hamas had done so by “locating rockets within schools and hospitals, or even launching these rockets from densely populated areas”, while Israel had attacked civilian areas of Gaza such as schools, hospitals, homes and UN facilities.

An attack on a school in the Jabaliya refugee camp on Wednesday morning killed at least 16 displaced civilians, while the shelling of a market near Gaza City on the same day killed 17 people.

The US described the shelling of the school as “totally indefensible” and urged Israel to do more to protect civilian life.

Israel said it would investigate the shelling and apologise if Israeli fire was responsible.

Speaking earlier on Thursday, Israeli Prime Minister Benjamin Netanyahu said the military would continue dismantling Hamas’ tunnel network “with or without a ceasefire”.

Israel has uncovered a complex network of tunnels dug by militants under the border to infiltrate and attack Israeli troops and civilians.

But a senior Israeli official told the BBC that 70-80% of the tunnels had been “neutralised” and just a few more days were needed to dismantle the remainder.

Israel occupied Gaza in the 1967 Middle East war and only pulled its troops and settlers out in 2005.

Israel considered this the end of the occupation, but it still exercises control over most of Gaza’s borders, water and airspace. Egypt controls Gaza’s southern border.