Google is to start building its own self-driving cars

Google is to start building its own self-driving cars, rather than modifying vehicles built by other manufacturers.

The car will have a stop-go button but no controls, steering wheel or pedals.

Pictures of the Google vehicle show it looks like a city car with a “friendly” face, designed to make it seem non-threatening and help people accept self-driving technology.

Co-founder Sergey Brin revealed the plans at a conference in California.

“We’re really excited about this vehicle – it’s something that will allow us to really push the capabilities of self driving technology, and understand the limitations,” said Chris Urmson, director of the company’s self-driving project.

He added that the cars had the ability to “improve people’s lives by transforming mobility”.

But some researchers working in this field are investigating potential downsides to driverless car technology.

They believe they could make traffic and urban sprawl worse, as people accept longer commutes as they do not have to drive themselves.

The BBC was given access to the Google team to talk about the secret project, and see early renderings of the car.

It looks almost cartoon-like, it has no traditional bonnet at the front, and the wheels are pushed to the corners. 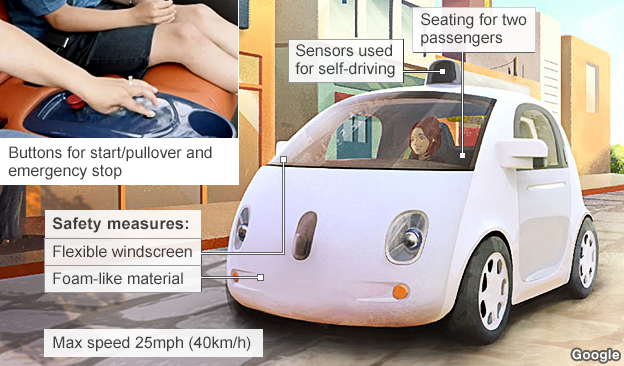 It will seat two people, propulsion will be electric, and at the start it will be limited to 25mph (40km/h) to help ensure safety.

The most significant thing about the design is that it does not have any controls, apart from a stop/go button.

For early testing, extra controls will be fitted so one of Google’s test drivers can take over if there is a problem.

The controls will simply plug in, and Mr Urmson believes that over time, as confidence in the technology grows, they will be removed entirely.

The front end of the vehicle is designed to be safer for pedestrians, with a soft foam-like material where a traditional bumper would be, and a more flexible windscreen, which may help reduce injuries.

The vehicle will use a combination of laser and radar sensors along with camera data to drive autonomously.

It will depend on Google’s road maps, built specifically for the programme, and tested on the company’s current fleet of vehicles. 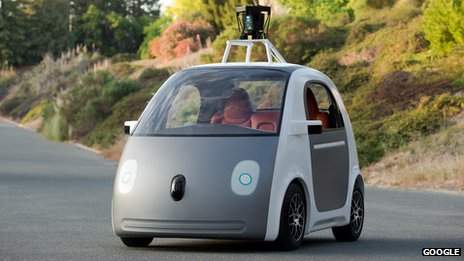 Ready in a year

Google recently announced that its self driving cars had covered 700,000 miles of public roads in autonomous mode, and that they were now tackling the tricky problem of busy city streets.

The company plans to build a fleet of around 200 of the cars in Detroit, with the hope of using them as an autonomous technology test bed.

“We’ll see these vehicles on the road within the year,” says Mr Urmson.

Advocates claim that autonomous cars have the potential to revolutionise transport, by making roads safer, eliminating crashes, and decreasing congestion and pollution. In the year to June 2013, more than 23,500 people were killed or seriously injured in road traffic accidents in the UK,according to government figures. 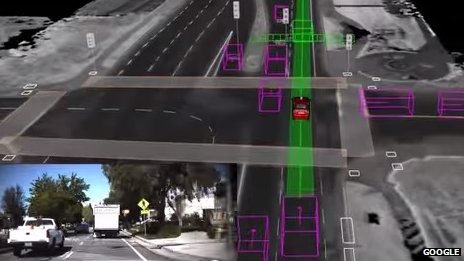 Ron Medford, previously the deputy director of the US National Highway Traffic Safety Administration, and now the safety director for the self-driving car team at Google, believes that number could be drastically reduced by removing the chance of driver error.

“I think it has the potential to be the most important safety technology that the auto industry has ever seen,” he said.

But Sven Beiker, executive director of the Center for Automotive Research at Stanford, cautions that driverless cars may still require human input in extreme circumstances and that people may forget how to operate their vehicles if they do not do it regularly.

This could be particularly dangerous in an emergency situation where the computer does not know how to react, and asks for input from a human who may not have been paying attention, he warned.

“You will not be able to fiddle around looking for the instruction manual in the glove box that you’ve never looked at before,” he said.

He equates it to people who drive automatics forgetting how to easily drive a car with a manual gearbox.