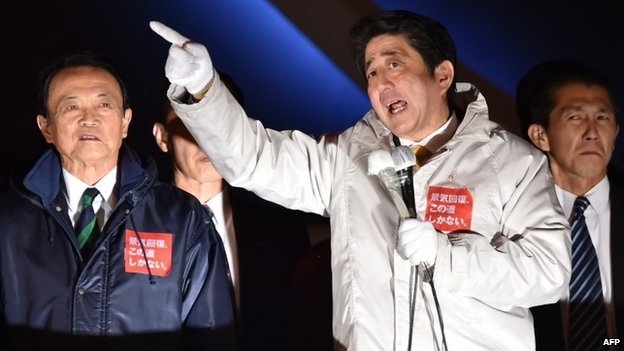 Shinzo Abe said the poll was a referendum on his economic policies, after Japan fell back into recession
Continue reading the main story

Exit polls suggest that the party of Japanese Prime Minister Shinzo Abe has secured a large majority in the country’s parliamentary elections.

Mr Abe had called a snap poll to boost support for his economic reforms.

He was elected in 2012 and has tried to revive the economy by raising public spending and printing money.

After an initial burst of growth, Japan slipped back into recession in the second half of this year.

Reports said turnout at polling stations was low due to voter apathy and heavy snowfall. The government said turnout was at just 35%, two hours before polls closed.

Could getting more women into work help Japan’s economy?

Finance Minister Taro Aso, who retained his seat in parliament, told reporters that the predicted win “shows that voters gave the Abe administration a positive evaluation over the past two years”.

“Abenomics is still halfway through, and I feel a strong sense of responsibility to push it further,” he added.

Japan is the third-largest economy in the world, according to the World Bank, but it has struggled in recent years.

Mr Abe has insisted that his policies, known as Abenomics, can get Japan back on track.

“I promise to make Japan a country that can shine again at the centre of the world,” he said in a recent campaign speech.

What is Abenomics?Shinzo Abe’s economic policy, launched in 2013, was so wide ranging that it was named after him. It was designed to help pull Japan out of two decades of deflation and kick-start its stagnant economy.

Economic growth briefly returned, helped by a weaker yen that boosted exporters, but 18 months on, Japan’s economy is back in recession, and support for Mr Abe has been dwindling.

Are women the answer to Japan’s broken economy?

He has also promised to amend the law to allow the Japanese military to engage in collective self-defence alongside allies who are threatened.

Economists say an increase in sales tax from 5% to 8% in April knocked consumer spending and helped to halt growth.

The tax increase was legislated by the previous government in 2012 to curb Japan’s huge public debt, which is the highest among developed nations.

Mr Abe called the election to seek a mandate to delay a second increase in the tax to 10%, scheduled for 2015.

Voters were choosing who sits in the 475-seat lower house of Japan’s parliament, the Diet.

Several surveys in recent weeks had pointed to a win for Mr Abe’s party.

Observers said this was partly due to the lack of a real political alternative, with the opposition in disarray.

The Banri Kaieda-led opposition Democratic Party is expected to pick up a handful of seats, but not enough to affect the parliamentary balance. 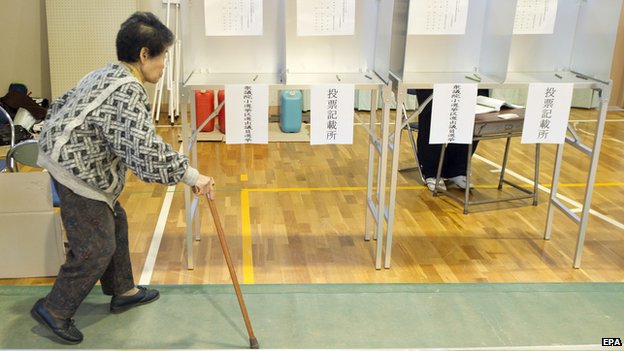 Japan’s population is rapidly ageing, leading to a strain on public resources

More on This Story

From other news sites

* May require registration or subscription
More videos from the BBC

‘All Muslim women should be how I am’

‘I can last a week without eating’

How The Rich Rule US Democracy