At least 48 people have died after suspected Islamist militants attacked hotels and a police station in a Kenyan coastal town, officials say.

The town is close to Lamu island, which is a well-known tourist resort.

Kenya has suffered a number of militant attacks since 2011 when its forces entered neighbouring Somalia to combat al-Shabab fighters.

The BBC’s Yusuf Dayo in Nairobi said the attack started at 20:30 local time (17:30 GMT) on Sunday as locals were watching a football World Cup match on television.

Local residents told the BBC that the attackers had hijacked a van and used it to attack various locations across the town.

Witnesses said gunmen, who had their faces covered, threw explosives into the local police station before entering and stealing weapons.

Kenya has been on high alert recently following warnings that al-Shabab was planning more attacks.

The US and UK have issued advisories to their nationals to keep away from the Kenyan coast.

Sunday’s attack comes days after the UK government closed its consulate in the nearby port city of Mombasa, citing heightened security threats.

“We understand the attackers have already fled but our officers are pursuing them,” Mr Mwaliko added. 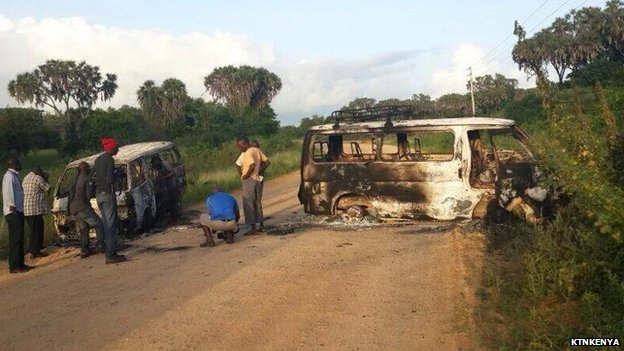 Al-Shabab militants are suspected of having carried out the attack

It is unclear who the gunmen are, but Kenyan army spokesman Major Emmanuel Chirchir said the “assailants [are] likely to be al-Shabab”.

He said surveillance aircraft had been dispatched to the region to help with the security operation.

Bozo Jenje, a journalist in Mombasa, told the BBC that residents had reported seeing bodies scattered across roads in the town.

He said Mpeketoni was a mainly Christian community.

Nearby Lamu island is a popular tourist destination with ancient architecture that isÂ listed as a Unesco World Heritage site.

Are you in Mpeketoni? Have you been affected by the recent activities? You can email haveyoursay@bbc.co.uk using the title ‘Mpeketoni’.