US President Barack Obama has said the nomination of Haider al-Abadi as Iraq’s prime minister-designate is a “promising step forward”.

He acknowledged that Iraq had been through “difficult days”, and urged its political leaders to work together.

Mr Maliki said Mr Abadi’s nomination was a “violation of the constitution”.

Speaking from his holiday retreat in Martha’s Vineyard, Mr Obama said US forces had successfully carried out air strikes to prevent the advance of Islamist militants in northern Iraq.

But Mr Obama said there was no American military solution to the crisis – and that only an inclusive Iraqi government could unify the fight against the Islamists.

Militants from the Islamic State (IS) group have made substantial gains in northern Iraq in recent months, forcing tens of thousands of people from religious minorities to flee their homes.

As well as the air strikes, the US has conducted air drops of essential supplies to Yazidi people stuck on a mountain range.

Over the last four nights, US and UK air crews have flown 14 successful missions, air dropping more than 310 bundles of food, water and medical supplies, and delivering almost 16,000 gallons of water and 75,000 meals, the US government says.

The US has also begun supplying weapons to the Kurdish Peshmergas, who are fighting the militants, senior US officials have told the Associated Press.

President Obama said Iraq’s new leadership “has a difficult task to regain the confidence of its citizens by governing inclusively and taking steps to demonstrate its resolve.”

He urged Mr Abadi to form a cabinet that represents all of Iraq’s ethnic and sectarian communities, and said mobilising US and international support would be easier once that happens.

The US has been reluctant to provide such help while the government was led by Mr Maliki, a Shia seen by many as fuelling ethnic and sectarian tensions that boosted support for the Sunni militants, the BBC’s Barbara Plett reports from Washington.

Mr Abadi’s nomination has also been welcomed by the presidents of France and Turkey, but not by the incumbent Prime Minister Nouri Maliki.

Who is Haider al-Abadi? 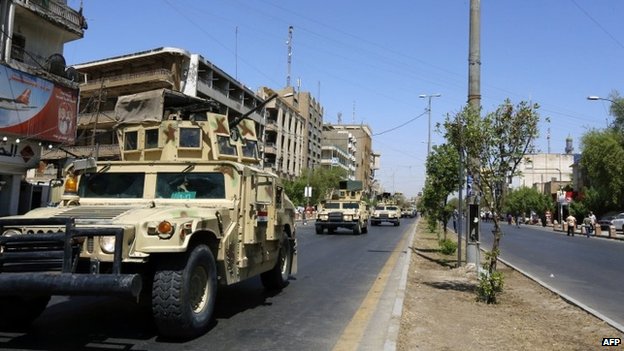 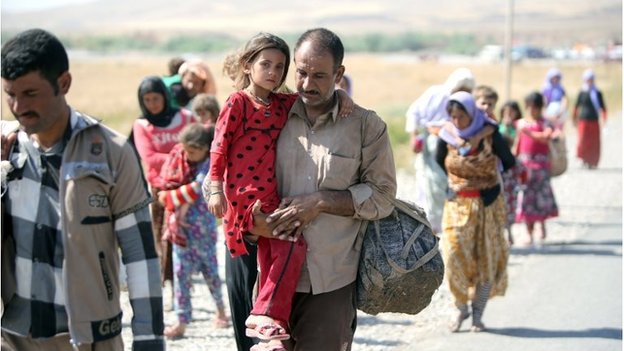 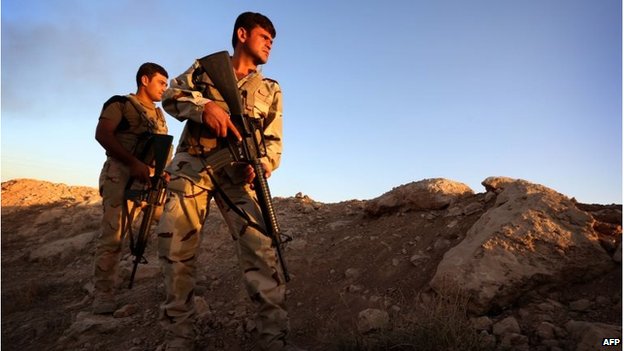 Kurdish fighters are trying to hold off the militants

Analysts say the nomination and subsequent endorsement of Mr Abadi is a public snub for Mr Maliki, whose State of Law coalition won the most seats in April’s elections.

Mr Maliki has condemned the move to replace him, saying it was a “violation of the constitution”, that would lead the country into a political crisis.

In a televised address, he added that he would “fix the mistake”.

On Monday, IS militants seized the town of Jalawla, north-east of Baghdad, after weeks of clashes with Kurdish fighters.

Also on Monday, the US military said it had carried out four air strikes targeting militants near Sinjar Mountain, in northern Iraq, where thousands of Yazidi refugees have been trapped.

The US says it has carried out a total of 15 air strikes so far.

Lt Gen William Mayville told reporters that US operations were currently limited to protecting US citizens and facilities, and assisting in breaking up IS forces that had laid siege to the Sinjar Mountain.

“We assess that US airstrikes in northern Iraq have slowed [IS’s] operational tempo and temporarily disrupted their advances toward the province of Irbil,”Â he said.

“However, these strikes are unlikely to affect [IS’s] overall capabilities or its operations in other areas of Iraq and Syria.”

On Sunday, Kurdish forces said they had regained the towns of Gwer and Makhmur from the militants, helped by the recent US air strikes in Nineveh province.