US actor and comedian Robin Williams has been found dead, aged 63, in an apparent suicide.

Marin County Police in California said he was pronounced dead at his home shortly after officials responded to an emergency call around noon local time.

Williams was famous for such films as Good Morning Vietnam and Dead Poets Society and won an Oscar for his role in Good Will Hunting.

His publicist said he had been “battling severe depression”.

In the past he had talked, and even joked, about his struggles with alcohol and drugs.

Williams had recently returned to a rehabilitation centre to “fine-tune” his sobriety,Â the Los Angeles Times reported in July.

The local Sheriff’s office said Williams was found unconscious and not breathing at his home near Tiburon, north of San Francisco.

“At this time, the Sheriff’s Office Coroner Division suspects the death to be a suicide due to asphyxia, but a comprehensive investigation must be completed before a final determination is made,” police said in a statement.

In a statement, Williams’ wife, Susan Schneider, said she was “utterly heartbroken”.

“This morning, I lost my husband and my best friend, while the world lost one of its most beloved artists and beautiful human beings. I am utterly heartbroken,” she said.

“On behalf of Robin’s family, we are asking for privacy during our time of profound grief. As he is remembered, it is our hope the focus will not be on Robin’s death, but on the countless moments of joy and laughter he gave to millions.”

Born in Chicago, Illinois in 1951, Williams joined the drama club in high school and was accepted into Juilliard School in New York, the prestigious American academy for the arts.

There, he was encouraged by a teacher to pursue comedy.

The actor was first known for his zany portrayal of an alien in the 1970s TV show Mork and Mindy, a character first seen in the sitcom Happy Days.

He was a regular stand-up comedian while continuing to act in such films as Good Morning Vietnam, Dead Poets Society, Mrs Doubtfire and as the voice of the genie in Aladdin.

While many of his roles were in comedies, Williams won the Oscar in 1998 for best supporting actor as a therapist in Good Will Hunting.

In a 2009, the actor told Reuters his children often referenced his own struggles with alcohol when he told them off for bad behaviour.

“They went: ‘And you had a three-year drunken relapse’. Ah, thank you for bringing that back, my little happy creatures,” Williams joked.

In his final Instagram post two weeks ago, he published a photo of himself and his daughter as a toddler with the message: “Happy Birthday to Ms Zelda Rae Williams! Quarter of a century old today but always my baby girl. Happy Birthday @zeldawilliams Love you!” 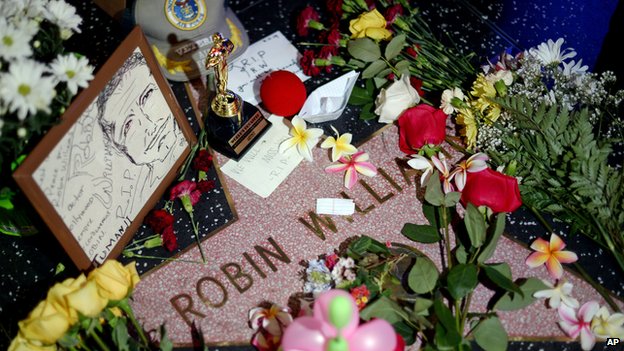 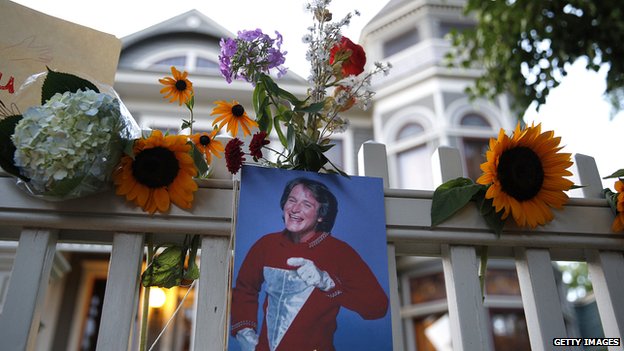 Tributes have also been left outside the house in Boulder, Colorado used in Mork and Mindy’s title sequence

President Barack Obama wasÂ one of manyÂ offering condolences to his family when he said: “Williams arrived in our lives as an alien – but he ended up touching every element of the human spirit.

“He made us laugh. He made us cry. He gave his immeasurable talent freely and generously to those who needed it most – from our troops stationed abroad to the marginalised on our own streets.”

Martin and Williams appeared on stage together during an 1988 Broadway revival of Waiting for Godot.

Comedian and talk show host Ellen de GeneresÂ tweeted: “I can’t believe the news about Robin Williams. He gave so much to so many people. I’m heartbroken.”

7 of the world’s most beautiful lakeside lodges

Who Wins MTN 4syte Music Video Awards Most Influential Artiste Of The Year?

Airtel Touching Lives to the aid of Benedicta and Fatau