Somalia’s government has offered an amnesty to fighters of Islamist group al-Shabab, amid uncertainty over whether its leader survived a US air strike.

The militants would be reintegrated into society if they surrendered over the next 45 days, a statement said.

The offer seems to be an attempt to exploit the vulnerability of al-Shabab following the air strike, analysts say.

Al-Shabab has refused to say whether its leader Ahmed Abdi Godane survived.

The strike took place on Monday as Mr Godane was travelling in a convoy in southern Somalia’s Lower Shabelle region.

Witnesses said US troops landed at the site soon after the strike and took away bodies after a fierce gun battle, reports the BBC Somali Service’s Abdullahi Abdi. 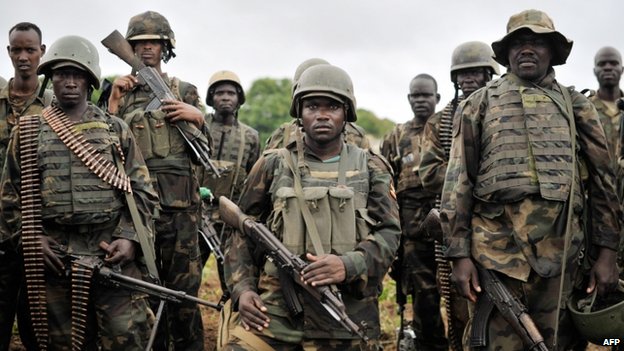 The 22,000-member AU force in Somalia is pushing al-Shabab into rural areas in the south

The Somali government’s amnesty offer appears to be a political initiative aimed at encouraging defections from al-Shabab, he says.

The group is under pressure militarily – not only has it faced a US air assault, but African Union (AU) and government troops have launched a ground offensive to recapture territory, our reporter adds.

Al-Shabab has lost control of four towns in the past week, with AU and government forces now advancing towards the coastal town of Barawe, the main base of the militants, he says.

However, the government faces the risk of its amnesty offer backfiring as al-Shabab fighters take it up under the false pretext that they have changed when, in fact, they want to regroup in government strongholds to continue their military campaign for an Islamic state, our correspondent adds.

On Tuesday, al-Shabab spokesman Abu Mohammed told AP news agency that six of its fighters were killed in the US air strike, about 240km (150 miles) south of the capital, Mogadishu.

He said Mr Godane’s convoy was on its way to Barawe, but he refused to confirm whether the group’s leader was among the victims.

Our correspondent says it could take the US a long time to conclude DNA tests on the bodies it had taken.

Following an air strike in 2011, it took the US about a month to confirm that it had killed al-Qaeda operative Fazul Mohammed.

Mr Godane led al-Shabab into an alliance with al-Qaeda in 2009.

A US air strike killed his predecessor Aden Hashi Ayro a year earlier.

The AU’s 22,000-strong force in Somalia has helped the government regain major towns and cities from al-Shabab.

However, the group still controls large swathes of territory in rural areas and continues to carry out bombings and assassinations in Mogadishu.

It is estimated to have at least 5,000 fighters.

Who is Ahmed Abdi Godane? 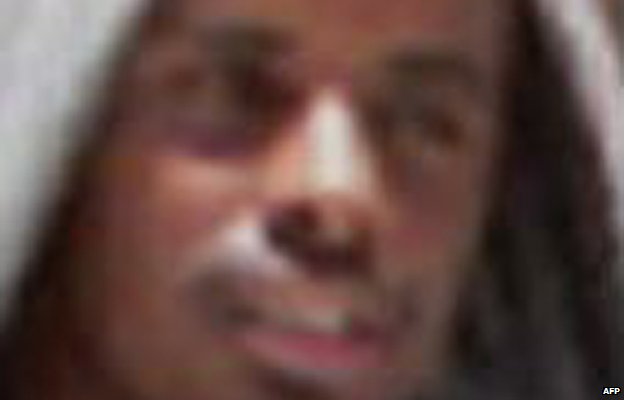