Owners will be able to attach the new devices to an existing PS4 controller via a special mount to play titles powered by the console’s processors.

Until now this “remote play” facility had only been offered to the firm’s PlayStation Vita handheld console.

Experts said the feature should help Sony’s kit stand out from Android rivals at a time when competition is intensifying.

But despite the popularity of the PS4, they added, the move was likely to have only a slight impact on sales.

The Japanese company also unveiled a new smartwatch and a fitness tracker at a press conference in Berlin, ahead of the start of the Ifa tech show.

The launches come a month after Sony cut its smartphone sales forecast by 14% for this financial year, saying its original figure was too “optimistic”.

The firm’s global handset market share has slipped from 3.9% to 3.1% over the past year, according to research firm IDC, as Chinese rivals have made gains.

The Z3, Z3 Compact and Z3 Tablet Compact all rely on a wi-fi link to control the PS4 and view the graphics it generates.

The firm suggests the feature will appeal to gamers who have to share use of the living room TV.

“Our promise to the consumer has been to bring the best of Sony – all our consumer electronics experience – into a smartphone,” Calum MacDougall, head of Xperia marketing, told the BBC.

“We’ve consistently delivered that in the Z series with digital imaging capability, with our TV screen technology, with our audio capability. And now this is a big step up to almost complete the set with gaming functionality.” 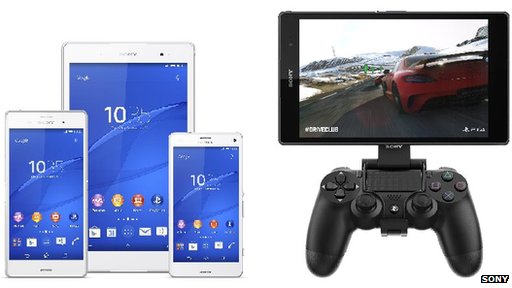 Praise for the move was qualified.

“For the gaming fraternity this is certainly something that would pique their interest when looking across a kind of homogenous set of smartphones that largely look the same and do the same kind of thing,” said Ben Wood, head of research at CCS Insight, a telecoms consultancy.

“But I’m not sure it will be a killer feature.”

Ryan Reith, mobile devices analyst at IDC, agreed that the facility had appeal to a niche audience, but said at this point the majority of gamers’ needs were met by existing tablet and phone apps. 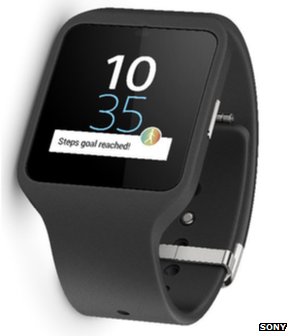 Other features of the Z3 smartphone include:

The firm has also taken the relatively unusual step of keeping the phone’s 5.2in (13.2cm) screen at 1080p resolution rather than using a higher resolution panel.

While this limits the level of detail displayed, the firm says the benefit is that the handset offers a longer-than-average two days of use between battery charges. 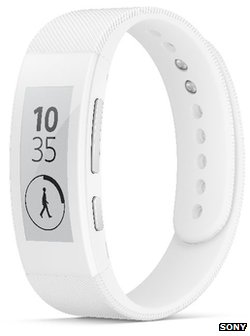 The Smartband Talk is a waterproof wristband that tracks the user’s physical activity and can last three days between charges. It also acts as a remote microphone and speaker for Bluetooth-connected Android phones, letting owners make calls from their wrist.

The SmartWatch 3 is Sony’s first watch to be powered by Google’s Android Wear operating system, which is designed for small screens.

It also adds four gigabytes of internal memory, allowing it to offer “offline” music playback at times the owner does not have their phone with them.

Unlike LG and Motorola, Sony only offers its watch in a square design rather than a circular option, which some believe is more fashionable.

“We believe the squarer screen is the better way to go to offer better second-screen functionality,” said Mr MacDougall.

“Whether it’s looking at your life-log application or notifications, you get a much richer experience in that way.”

However, he declined to rule out Sony releasing a circular watch at a later stage.

“Let’s see if Sony has a round screen at CES in January,” remarked Mr Cross in response.

“All the feedback we’re getting is that for wearables to be attractive they need to become more fashionable, and the circular watches have resonated with the consumer and fashion media as to what we want. 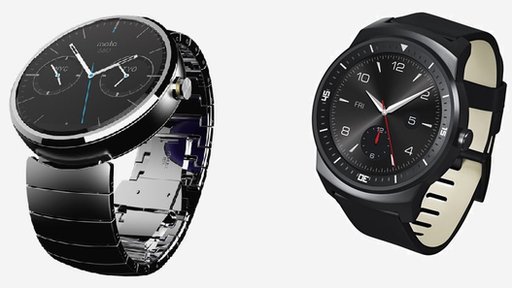 “At least Sony now has a stake in the ground with Android Wear, which we believe will become the most pervasive smartwatch operating system outside anything Apple do.”