President Barack Obama has vowed the US will not be intimidated, after Islamic State militants released a video showing the beheading of American journalist Steven Sotloff.

He said the US will build a coalition to “degrade and destroy” the group.

Another US journalist, James Foley, was similarly killed last month.

Separately, the UK held a meeting of its emergency Cobra committee after threats to kill a British hostage who was also shown in the latest video.

The US has launched more than 120 air strikes in the past month to try to help Kurdish forces curb the IS advance.

After the latest video emerged, Mr Obama ordered the deployment of another 350 troops to Baghdad to protect US diplomatic facilities.

His announcement came as campaign group Human Rights Watch said it had uncovered new sites of Islamic State mass killings in the Iraqi city of Tikrit.

The militants are believed to have murdered more than 500 Iraqi soldiers after taking over a large Iraqi army base in June.

US National Security Council spokesperson Caitlin Hayden said that US intelligence agents had “analysed the recently released video showing US citizen Steven Sotloff and has reached the judgment that it is authentic”.

Speaking in Estonia, Mr Obama said the beheading was a “horrific act of violence and we cannot begin to imagine the agony everyone who loves Steven is feeling right now. Our country grieves with them”.

Steven Sotloff had a passion for the Middle East and a taste for adventure, as the BBC’s Frank Gardner reports

He added: “Whatever these murderers think they will achieve by killing innocent Americans like Steven, they have already failed.

“They have failed because, like people round the world, Americans are repulsed by their barbarism. We will not be intimidated. Their horrific acts only unite us as a country and stiffen our resolve.

“Those who make the mistake of harming Americans will learn that we will not forget, that our reach is long and that justice will be served.”

Mr Obama said the US strategy was to “try to ensure Isil is not an ongoing threat to the region”. Islamic State is also often referred to as Isil or Isis.

But Mr Obama warned such a strategy would take time and effort.

“It’s going to take time for us to be able to roll them back,” he said.

UK Prime Minister David Cameron told MPs the two American beheadings were “utterly abhorrent and barbaric”, adding: “We will not waver in our aim of defeating terrorism.”

Foreign Secretary Philip Hammond said: “We are doing everything we can to reassure the family of the British hostage who was shown in the video.”

This second video from Islamic State is significant, even though it was largely expected and dreaded. It shows that the recent US air strikes which have halted the lightning advance of IS across northern Iraq are causing the organisation real damage, upsetting its plans to extend by force its rule into Kurdistan.

Unable to hit back militarily against America’s jets, IS has responded with a form of information warfare that it knows will horrify most people in the West.

Secondly, by threatening to murder a British hostage, IS shows it makes little or no distinction between the US and Britain as its enemy. This is despite Britain so far restricting itself to dropping aid to refugees and flying in supplies to the Kurdish military, leaving air strikes to the Americans.

A spokesman for the Sotloff family had earlier indicated they believed the video was genuine, issuing a statement that said: “The family knows of this horrific tragedy and is grieving privately. There will be no public comment from the family during this difficult time.”

US state department spokeswoman Jen Psaki said it was believed that “a few” other Americans were still being held by Islamic State.

He had appeared in a video last month which showed James Foley being killed. 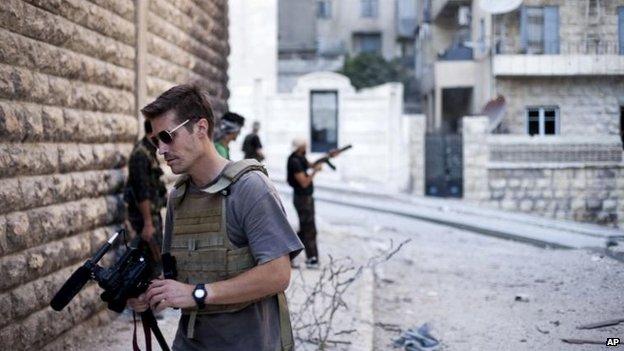 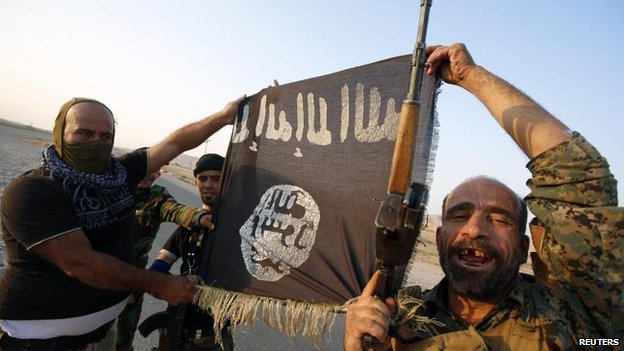 The latest video, entitled “A second message to America”, is about two-and-a-half minutes long and was apparently recorded in a desert.

Next to a masked figure, Mr Sotloff reads out a text addressed to President Obama saying: “You’ve spent billions of US taxpayers’ dollars and we have lost thousands of our troops in our previous fighting against the Islamic State, so where is the people’s interest in reigniting this war?”

The militant spoke with a British accent similar to that of the man who appeared to carry out the beheading of James Foley.

Mr Hammond told the BBC it seemed to be the same person.

Writing in theÂ New York Times,Â Thomas L FriedmanÂ warns that the US strategy on Islamic State must avoid the “fire, ready, aim” approach that followed the 9/11 attacks. He says: “There are no words to describe the vileness of the video beheadings of two American journalists by Isis, but I have no doubt that they’re meant to get us to overreact, a la 9/11, and rush off again without a strategy. Isis is awful, but it is not a threat to America’s homeland.”

The man says: “I’m back, Obama, and I’m back because of your arrogant foreign policy towards the Islamic State… despite our serious warnings.”