Government forces in South Sudan have launched an offensive on the strategic oil hub of Bentiu, after it was taken by rebels last month.

A column of government troops and armoured vehicles were earlier seen driving towards the centre, they add.

Rebel forces deny UN charges that they killed hundreds of people along ethnic lines after seizing the town in April.

Bentiu, in the north, has changed hands several times since fighting broke out in South Sudan last December.

Tensions came to a head after President Salva Kiir accused his sacked deputy, Riek Machar, of plotting a coup.

Mr Machar denied the charges, but then mobilised a rebel force to fight the government.

The government offensive in Bentiu, capital of Unity State, comes two days after President Kiir told US Secretary of State John Kerry that he was prepared to hold direct peace talks with Mr Machar.

The BBC’s Alastair Leithead, in the UN Mission in South Sudan (UNMISS) compound on the outskirts of the city, says he has heard gunfire coming out of the town, suggesting the battle is not yet over. 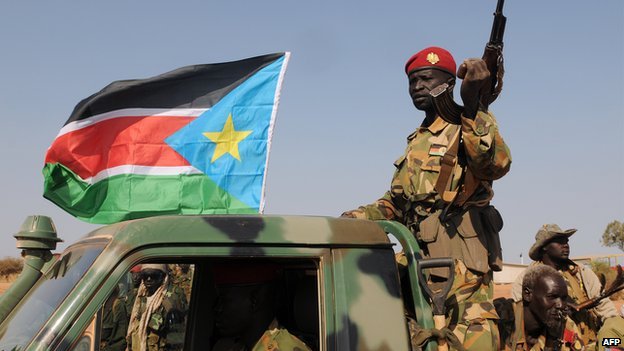 A long line of government troops in armoured personnel carriers, heavily armed, were earlier seen moving slowly towards the city, he adds.

On Friday, Mr Kerry secured an agreement from President Kiir to meet Mr Machar for talks in Addis Ababa that would be mediated by Ethiopian Prime Minister Hailemariam Desalegn. 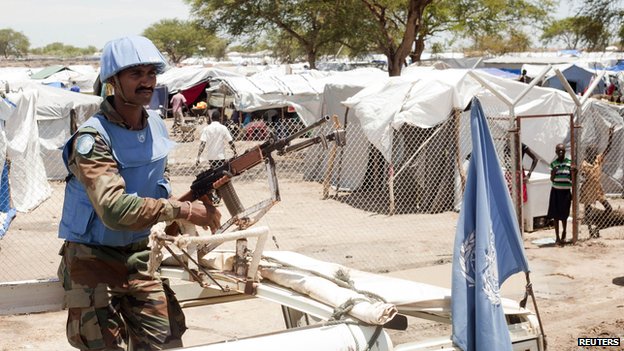 In an interview with theÂ Sudan TribuneÂ on Saturday, however, Mr Machar appeared to play down the prospect of imminent direct talks with President Kiir.

He told the Paris-based news website that he had asked Mr Kerry “what would be the purpose of transitional government”, adding that face-to-face talks “may be counter-productive”.

A truce negotiated between the two sides in January has been largely ineffective, with Mr Kerry warning of possible genocide and calling for more peacekeepers to be deployed in recent days. 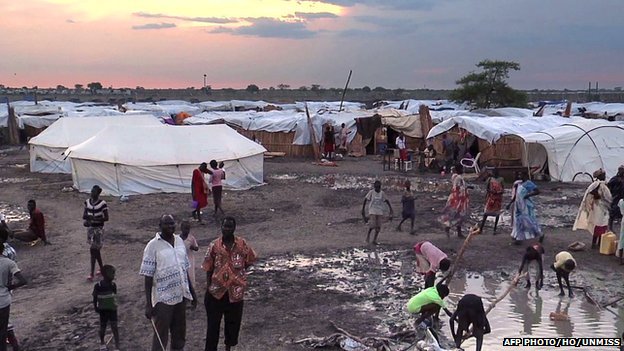 The power struggle between the two men – who fought together in the civil war before South Sudan’s independence – has increasingly taken on an ethnic dimension.

Mr Kiir is a member of the country’s largest group, the Dinka, while Mr Machar is from the second-biggest, the Nuer.

Rebel forces deny UN charges that they killed hundreds of people along ethnic lines after seizing the oil hub of Bentiu last month – in what is said to have been one of the worst atrocities since fighting erupted in December.

The UN said that non-Nuer South Sudanese, citizens of Sudan and even Nuers who were not celebrating the rebel arrival in the town were singled out and killed.

The UN Security Council condemned the mass killings, and threatened sanctions against those responsible for the continuing violence.

Both sides have been implicated in atrocities and war crimes, and fighting has intensified with the rebels saying they are closing in on northern oil fields and several key towns.

The UN has about 8,500 peacekeepers in South Sudan, which became the world’s newest state in 2011 after seceding from Sudan.