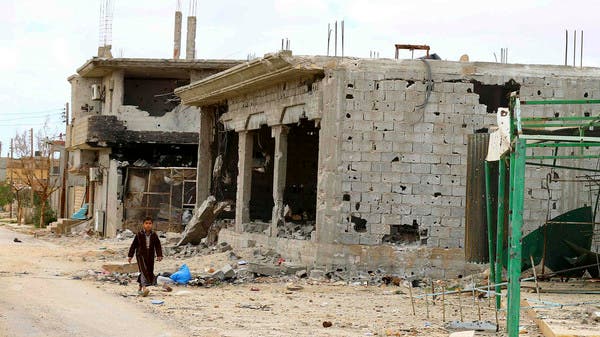 A boy walks next to the ruins of buildings in Benina, about 20 km east of Benghazi. (File photo: Reuters)
Text size A A A
Staff writer, Al Arabiya News
Friday, 12 December 2014

As 10 Mediterranean nations vowed to strengthen their teamwork against radical Islamists, the United Nations on Thursday warned that chaos stirred by Islamist fighters in Libya could engulf Sahel countries.

Ethiopian diplomat Hiroute Guebre Sellassie told the Security Council that the humanitarian and security crises in the band of semi-arid land south of the Sahara desert were worsening, pointing to turmoil in Libya as a key factor.

â€œIf the situation in Libya is not quickly brought under control, many states in the region could be destabilized in the near future,â€ said the U.N. envoy for the Sahel.

Libya has been sliding deeper into crisis, torn by rival governments and parliaments battling powerful militias, despite U.N. efforts to broker talks on ending the violence.

Torn by rival governments and parliaments battling powerful militias, Libya has been sliding deeper into crisis despite U.N. efforts to broker talks on ending the violence.

Last month, the Security Council added the Libyan group Ansar al-Sharia to its terror list over its links to Al-Qaeda and for running training camps for Islamic State fighters sent to Syria and Iraq.

Guebre Sellassie said terrorist and criminal networks in Libya were developing closer ties to Mali and northern Nigeria, dealing in arms sales and drug trafficking among other illegal trade.

Close to 20,000 arms have poured into the Sahel from Libya and most of the 18 tonnes of cocaine, worth $1.25 billion, sent to West Africa transits through the region, she said.

Human trafficking is rife, with children making up 60 percent of the victims.

Not only Sahel countries see Libyaâ€™s turmoil as threating, but Mediterranean nations — including France, Italy, Algeria and Libya — on Thursday, who
pledged greater cooperation in the fight against Islamic radicalism, expressed their worry.

â€œWe are worried by the situation observed in the state of Libya and we want to express our hope that this crisis will soon be solved, to restore peace and security in the country,â€ read a statement of defense ministers of the so called 5+5 initiative.

In a joint statement they promised to â€œwork with a renewed strengthâ€ to â€œtackle the security changes that we face, in particular illegal immigration, organized crime and terrorism.â€

Meanwhile, Spanish Defense Minister Pedro Morenes, who hosted the gathering, expressed his â€œfirm supportâ€ for the â€œlegitimate government of Libya.

â€œInternational jihadist terrorism directly affects our nations but it is also affecting countries that are not part of the 5+5 and which have the capacity to influence in our nations.â€

Several Islamist extremist groups are threatening the area, including jihadists from Al-Qaeda in the Islamic Maghreb who are active in Algeria and remain a major problem for Morocco.

The rise in Islamist violence regionally has contributed to a surge in refugees crossing the Mediterranean, which the United Nations refugee agency UNHCR said Wednesday has become â€œthe deadliest route of allâ€ for migrants.

The agency reported 3,419 deaths in the Mediterranean during attempted crossings this year as more than 207,000 people have attempted the sea crossing since the start of January.

That is nearly three times the previous known high of about 70,000 attempts in 2011, when the Libyan civil war was raging, the agency said.

Italy has been particularly affected by the rising number of migrants hoping to enter Europe by sea from Africa.