Pro-Russian activists have attacked the police headquarters in Ukraine’s southern city of Odessa, forcing the release of several people held over deadly violence two days ago.

Friday’s clashes led to more than 40 deaths. Most victims were pro-Russian separatists killed when the building they were in caught fire.

Ukraine’s interim PM has accused police of failing to prevent the violence.

He was speaking as Ukrainian troops encircled Sloviansk in the east.

The army operation is trying to wrest control from separatists who have taken over a government buildings in a number of towns.

The government seems finally to be taking the battle to the separatists, but can it gain the upper hand? â€

Hundreds of people descended on the police headquarters on Sunday afternoon in an initially peaceful protest calling for the released of those detained.

“We’ve gathered here in a protest against the illegal government and to get our guys released, citizens of Odessa”, said one woman.

The gathering turned violent as protesters – some wearing masks and carrying improvised weapons – broke windows and forced the gates.

There were chants of “Russia, Russia” and “Russians won’t abandon their own”.

A number of detainees were then released by the police, apparently in an attempt to pacify the crowds. Reuters, quoting police sources, put the number freed at 30. The interior ministry, in a statement quoted by the Associated Press, said 67 people were released. 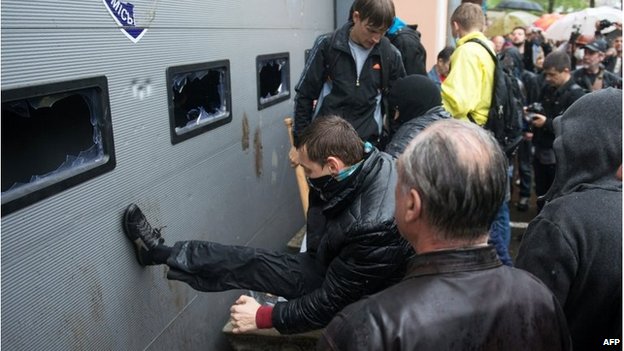 Protesters broke windows and doors of the police building in Odessa 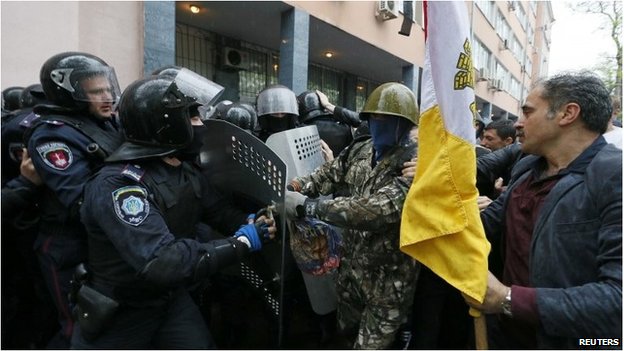 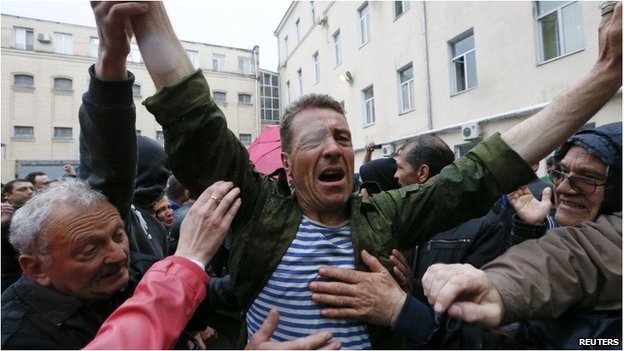 Odessa had been observing a day of mourning for those killed on Friday, when running street battles involving petrol bombs led to a fire breaking out on the third floor of a trade union building.

Dozens of pro-Russian activists had barricaded themselves inside. While some were rescued, 38 people either burned, suffocated or jumped to their deaths. 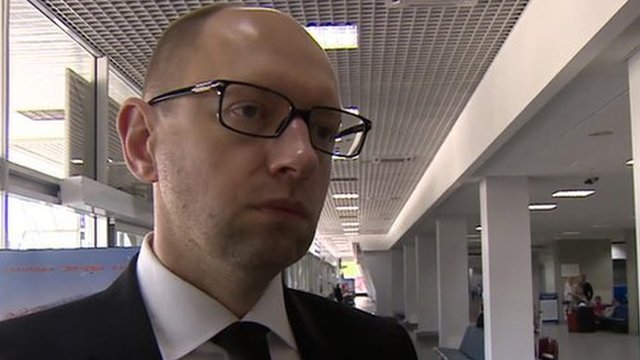 Ukrainian Prime Minister Arseniy Yatsenyuk: “These security forces [in Odessa] are inefficient and violated the law”

Moscow and Kiev have blamed each other’s supporters for the fire.

On Sunday, many visited the burned out trade union building, which now has a large Russian flag draped on one wall, to pay tribute.

Interim PM Arseniy Yatsenyuk, who has travelled to Odessa, has ordered a full investigation into what happened, saying the authorities did “nothing to stop this crackdown”, and were “inefficient and they violated the law”.

He told a news conference that all the senior police in the city had been fired and would be replaced.

But he said the unrest was “part of a plan fomented by Russia to destroy Ukraine”.

“Russia’s aim was to repeat in Odessa what is happening in the east of the country,” where pro-Russian forces have taken control of government buildings in a number of towns, he said.

Mr Yatsenyuk insisted Kiev had not lost control entirely, saying much would depend on whether local populations “support peace and stability or whether they support those who are sponsored by Russian”.