US-led coalition air strikes have hit Islamic State (IS) targets near the besieged Syrian town of Kobane on the border with Turkey, the Pentagon says.

An IS building and two “armed vehicles” were destroyed at the Kobane border crossing, US Central Command announced.

Other strikes hit IS targets elsewhere in Syria and in northern Iraq.

Kurdish fighters have been defending Kobane against IS since some 140,000 civilians fled the town and surrounding area for Turkey.

IS shelled Kobane on Saturday and several people were killed, the BBC’s Paul Wood reports from the scene.

The coalition air strikes did not appear to prevent skirmishes during the night between IS and the Kurdish defenders, our correspondent says. 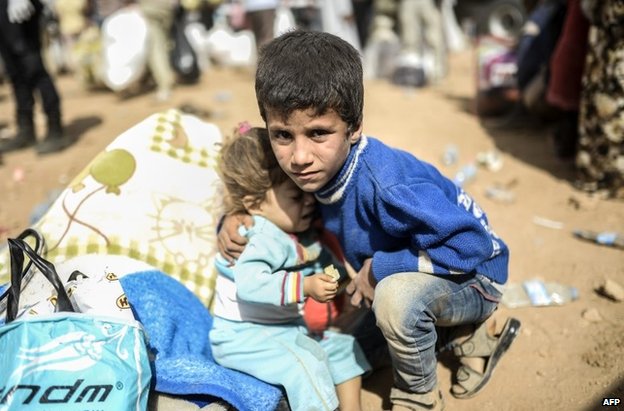 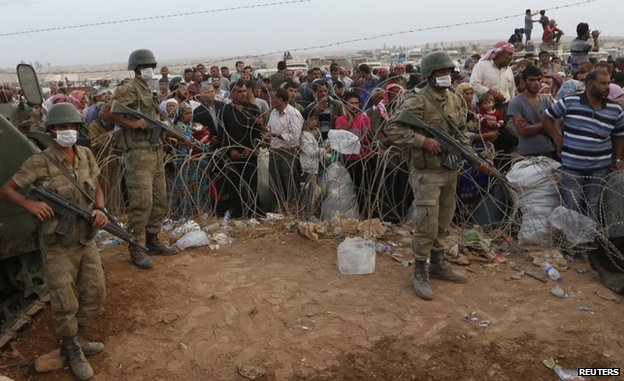 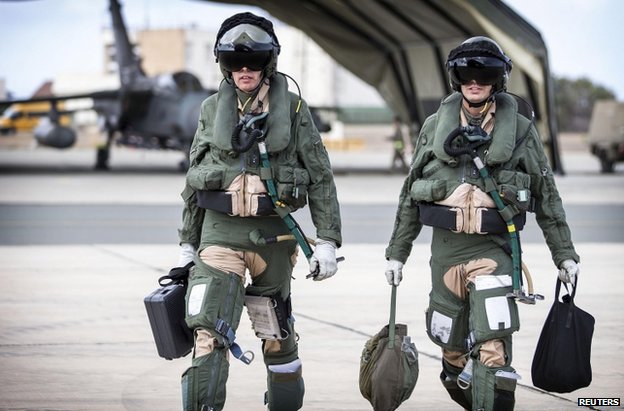 An RAF Tornado jet crew at Akrotiri air base, Cyprus 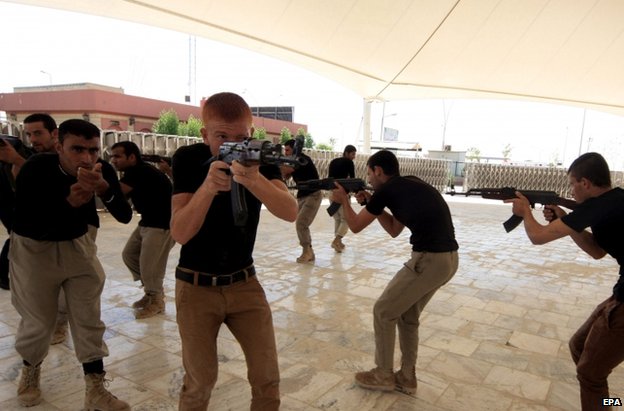 In the latest coalition action, Saudi, Jordanian and UAE forces joined the US in launching fighter and drone strikes. According to the Pentagon

All the aircraft involved returned safely, the US military said.

At the scene: Paul Wood, Kobane

The sound of warplanes circling overhead is nearly constant. And in the early hours of the morning people heard what they said were multiple air strikes against Islamic State positions.

Not before time, say the Kurdish forces defending this place. They are in the fight of their lives, with the jihadis now just a 10-minute drive from the town, and threatening to push further.

At the last Kurdish position outside Kobane last night bullets whined overhead and shells fell either side of the main road to the town.

The Kurds are grateful for the air strikes, but the battle for Kobane is far from over.

Several thousand Kurdish refugees are stuck at the railway line which marks the border with Turkey along with their sheep and cattle.

The problem is that, as refugees, they cannot take their animals, their livelihoods, with them but they believe they will be killed if they turn back.

On Friday the UK became the latest nation to join the US-led coalition against IS, which controls large swathes of Syria and Iraq after rapid advances in the summer.

Jonathan Beale: “They have been authorised to engage targets on the ground”

MPs voted overwhelmingly in favour of air strikes in Iraq, but not in Syria.

Two of six RAF Tornados based in Cyprus have carried out their first combat mission over Iraq since the British Parliament authorised air strikes targeting IS.

They had flown out loaded with laser-guided bombs and missiles, and were followed by an RAF refuelling tanker.

The UK also has a Rivet Joint spy plane in the region.

Speaking to BBC’s Newsnight, he warned the campaign would be “long and drawn out”.

French fighter jets are already taking part in strikes in Iraq with Belgium and the Netherlands each pledging six F-16s planes and Denmark deploying seven.

About 40 countries, including several from the Middle East, have joined the US-led coalition against IS.

European countries have so far only agreed to strike targets in Iraq where the government has asked for help.

Who are Islamic State (IS)?