Samsung has unveiled a virtual reality headset and a smartphone whose screen bends around one of its sides.

The new kit was revealed at the Ifa tech show in Berlin.

In addition to the Gear VR and Note Edge, the company also showed off the fourth standard version of its large-screened Note smartphone, which introduces an ultraviolet light sensor.

The announcements come at a time when Samsung Electronics is perceived to be on its back foot.

In July the division reported a 20% year-on-year drop in its net profit and dozens of executives voluntarily agreed to return part of their bonuses.

The company’s smartphone market share fell from 32.2% in the April-to-June quarter of 2013 to 24.9% in the same period this year, according to research firm IDC, despite the fact it has one of the biggest ranges of handsets.

By contrast, its Android rivals Lenovo, Huawei, Xiaomi and Motorola all made gains.

At Ifa, DJ Lee, Samsung Electronic’s marketing chief, said his firm was “focused on accelerating the speed of innovation” and promised to “never slow down”.

The virtual reality headset is the result of an alliance with Facebook-owned Oculus and acts as an add-on for the Galaxy Note 4.

It uses the phone’s 5.7in (14.5cm) screen and speakers, and adds a focal adjustment lens – allowing it to adjust for near and farsighted eyes – and a variety of sensors to track head movements.

The firm said the machine would offer a 96-degree field of view, giving an experience similar to looking at a giant 175in (4.4m) screen from two metres away. 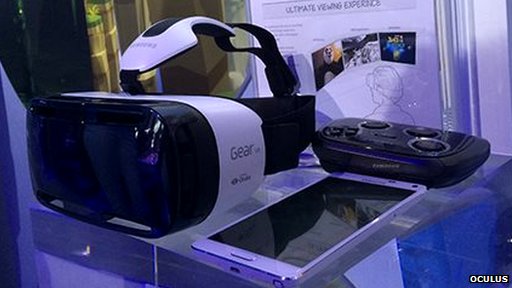 The Gear VR will be sold with a microSD card containing a small collection of 360-degree videos and virtual reality games.

Samsung said the point of wrapping the screen of the Galaxy Note Edge around its side was to offer a new way to access frequently used apps and alerts, which would be useful at times when the rest of the screen was obscured by a protective cover.

It acts as a kind of scrollable dock or toolbar that can be controlled with a swipe of the thumb.

But one expert suggested the functions offered by the Gear VR and Galaxy Note Edge might take a while to reach their full potential. 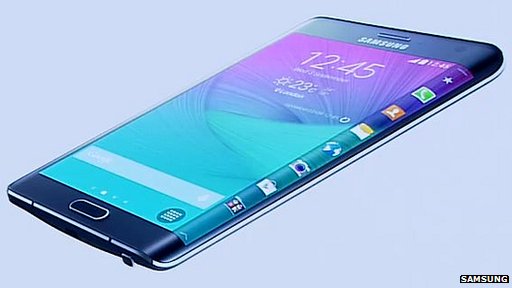 “[The headset] is going to be a niche thing, simply because until there are great apps and games to take advantage of it, that kind of experience is not going to be a mainstream one,” said Ian Fogg from the consultancy IHS.

“Unlike previous curved screen smartphones, such as the LG Flex, the Galaxy Note Edge screen delivers practical benefits. But to maximise the utility, Samsung will need third-party app developers to support the edge display.

“And because Samsung offers this display on just one handset, few app developers will choose to support it unless Samsung pays app developers to tailor their apps.”

Samsung appears to recognise that of its new devices, the Galaxy Note 4 is likely to be the bestseller, calling it the “hero of the day”.

The phone is the same size as its predecessor, but now features a “quad HD” screen with 550 pixels per inch, meaning it should in theory present more detail than most of its rivals. 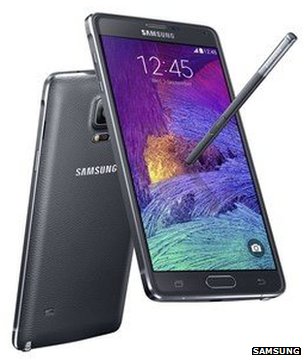 Boosting screen resolution takes a toll on battery life, but the company was keen to promote that it included “fast charging” technology.

It said the Note 4 would take about 30 minutes to bring its battery up to a 50% charge, versus a 55 minute wait for the Note 3.

The company said other changes included:

The most unusual feature, however, is the inclusion of what Samsung says is the “world’s first UV sensor in a mobile device”.

The component provides users with a built-in way to track their exposure to sunlight if they keep the device outside of their pocket or bag.

However, Netatmo’s June – a bracelet that wirelessly transmits UV levels to connected smartphones – may offer a more practical solution for consumers wanting this feature.

“I expect the Samsung Note 4 to stand out as an optimised and well-designed product leading in its phablet category, even though it was too early for it to ship with the forthcoming Android L version,” commented Thomas Husson, mobile devices analyst at the tech research firm Forrester.

“However, I think this is mostly an incremental change with too much of a focus on the feature and hardware specs. What is missing is a total experience on top of the device to really differentiate it in the interchangeable Android ecosystem.”